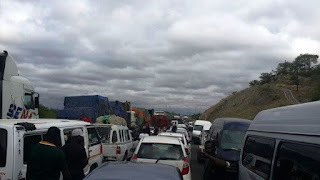 (Bumper to bumper about 4km from the border)

Words do not come easy, how do you explain it when it is taking 12 hours to drive from the weigh bridge on the South African side to the Zimbabwe side, a distance of a mere three kilometres at most.

That was the situation at the border on the 23rd of December 2017.

The South African side of the border is managing the situation quite well with queues moving but the situation is worse on the Zimbabwe side as the congestion has backed up bumper to bumper for over eight kilometres into South Africa.

Those familiar with Musina the queue from time to time is stretching up to Petros Garage on the N1 road. 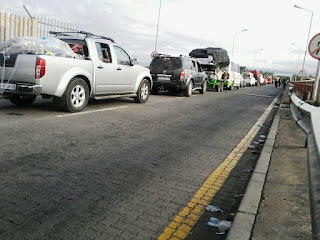 Impatient Kombi drivers have worsened the situation by trying to overtake and jumping the queue resulting in virtual blockage of the Musina to Beitbridge road.

Zimbabwe Immigration are on top of the situation with no queues.

Zimbabwe Revenue Authority is another case, they are virtually not in the game. So many processes to be done and few operatives to do it or no clear indications of what is to be done, when and where.

The result has been congestion where even those whose papers could be ready are stuck because the release of cars is not as fast. Unlike other years when there were officers writing Temporary Import Permits out side, this year they are all in the main Hall and the temporary warehouse only and when we counted them they were not more than twenty.

It looks like for the umpteenth time the Zimbabwe Revenue Authority were not prepared for the Northbound wave of travellers. 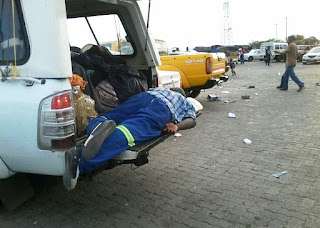 Taking a much deserved nap

In two weeks time, we will be seeing how the southbound wave will be dealt with by the South African Immigration.